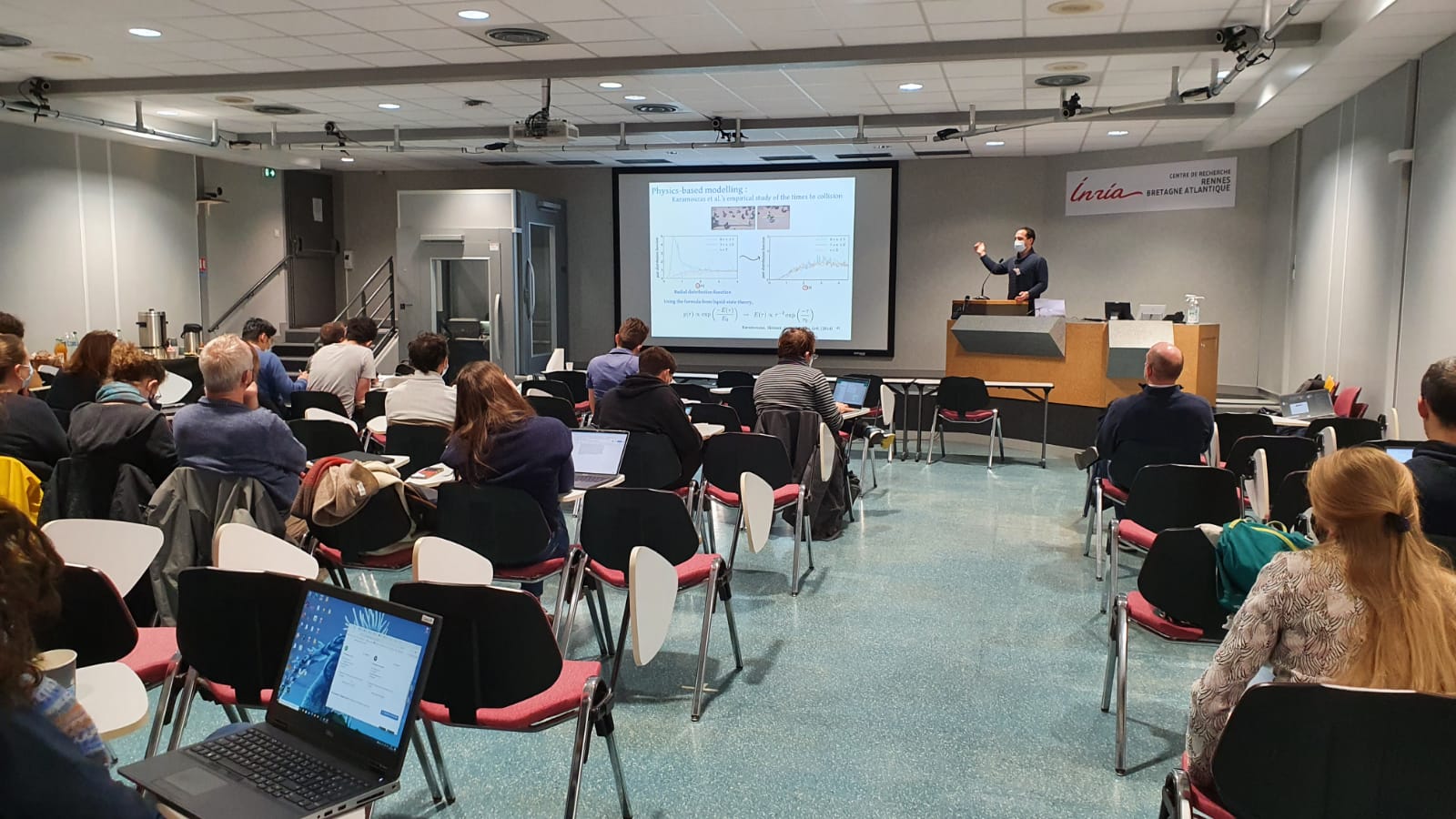 On Friday 26 November, there was a morning of discussion with two specialists in dense crowds: Bertrand Maury and Alexandre Nicolas.

Between those physically present and those connected remotely, more than 30 scientists from different backgrounds attended the presentation of the CrowdDNA project and the two talks on dense crowds.

Bio : Bertrand Maury is a professor at the  Laboratoire de Mathématiques d’Orsay (Université Paris-Saclay), at Ecole Normale Supérieure (PSL University), and at Ecole des Mines-Paris Tech. His activities were initially centered about numerical resolution of fluid flows (with applications to respiratory flows, blood flows, and the collective motion of active entities like living cell).

More recently,  he has been working on the modeling of crowd motions, in particular dense crowds, and more widely to the multimodal motion of agents (data acquisition, real-time simulation, short time prediction, ..).

Title: Some issues in the modeling of crowd motions

Abstract: We shall address in this talk some issues related to  the modeling of crowd motions.  We will first present an open source Python library dedicated to to microscopic simulations (http://www.cromosim.fr), and then focus on two points  : differences between microscopic and macroscopic approaches, and coupling between different models. We will complement this academic presentation by some real-world problems, in particular a collective project (with LCPP, CSTB, Movement Strategies, CNPP, Effects, LEMTA, Studio Fahrenheit) the experimental evacuation of a 10-storey building in Paris, for which we compared experimental data with the results obtained by various commercial and academic tools.

Bio: Alexandre NICOLAS is a research fellow at the CNRS, affiliated to the Institut Lumière Matière (CNRS & Univ. Lyon 1). He is a specialist in the modelling of complex materials and systems, and explores in particular the flows of these systems using statistical physics tools to understand the emergence of collective phenomena. His thesis, defended at LIPhy (Grenoble) in 2014 after studies at the Ecole Polytechnique and Cambridge (UK), focused on the modelling of amorphous solid flows. He then studied pedestrian flows in evacuation situations during a postdoctoral stay in Bariloche, Argentina, and then at the LPTMS in Orsay, before spending a year working on very concrete mobility and transport issues in an innovative design office.

His current research activity focuses on the study of human mobility through the prism of physics, in particular the exploration of the dynamics of dense crowds, the development of models combining field data and simulations for epidemic propagation within crowds, as well as the study of vehicular parking.

Abstract: Agent-based models inspired from Physics offer a promising avenue to study pedestrian dynamics and get insight into issues of major socio-economic importance (How to best dimension and arrange public facilities? Can tragic stampedes at mass gatherings be prevented?) while also understanding the emergence of collective dynamical properties. However, several deficiencies have been evidenced in the most popular of these models, the Social Force Model (SFM). I will expose some robust features [1-2] of the dynamics of crowds that conflict with the SFM predictions, but bolster a physical approach in which anticipation is duly integrated.

Then, I will argue that a line of models, in which interactions depend on an anticipated time to collision [3] rather than on distance, may bear greater promises than more traditional models for the description of these systems. The development of this line of modelling and its test on a large-scale experimental scenario is at the centre of one of the two facets of the French-German MADRAS project (the other facet being machine-learning), which involves teams in Wuppertal, Jülich, Toulouse, and Lyon.

The talk will be concluded by a short focus on the modelling of groups [4] in these approaches.

[4] NICOLAS, Alexandre et HASSAN, Fadratul Hafinaz. Social groups in pedestrian crowds: Review of their influence on the dynamics and their modelling. Transportmetrica A: Transport Science, 2021, p. 1-26.

This project has received funding from the European Union’s Horizon 2020 research and innovation program under grant agreement No 899739.

We use cookies on our website to give you the most relevant experience by remembering your preferences and repeat visits. By clicking “Accept All”, you consent to the use of ALL the cookies. However, you may visit "Cookie Settings" to provide a controlled consent.
Cookie SettingsAccept All
Manage consent

This website uses cookies to improve your experience while you navigate through the website. Out of these, the cookies that are categorized as necessary are stored on your browser as they are essential for the working of basic functionalities of the website. We also use third-party cookies that help us analyze and understand how you use this website. These cookies will be stored in your browser only with your consent. You also have the option to opt-out of these cookies. But opting out of some of these cookies may affect your browsing experience.
Necessary Always Enabled
Necessary cookies are absolutely essential for the website to function properly. These cookies ensure basic functionalities and security features of the website, anonymously.
Functional
Functional cookies help to perform certain functionalities like sharing the content of the website on social media platforms, collect feedbacks, and other third-party features.
Performance
Performance cookies are used to understand and analyze the key performance indexes of the website which helps in delivering a better user experience for the visitors.
Analytics
Analytical cookies are used to understand how visitors interact with the website. These cookies help provide information on metrics the number of visitors, bounce rate, traffic source, etc.
Advertisement
Advertisement cookies are used to provide visitors with relevant ads and marketing campaigns. These cookies track visitors across websites and collect information to provide customized ads.
Others
Other uncategorized cookies are those that are being analyzed and have not been classified into a category as yet.
SAVE & ACCEPT